A Brief History of English Literature. 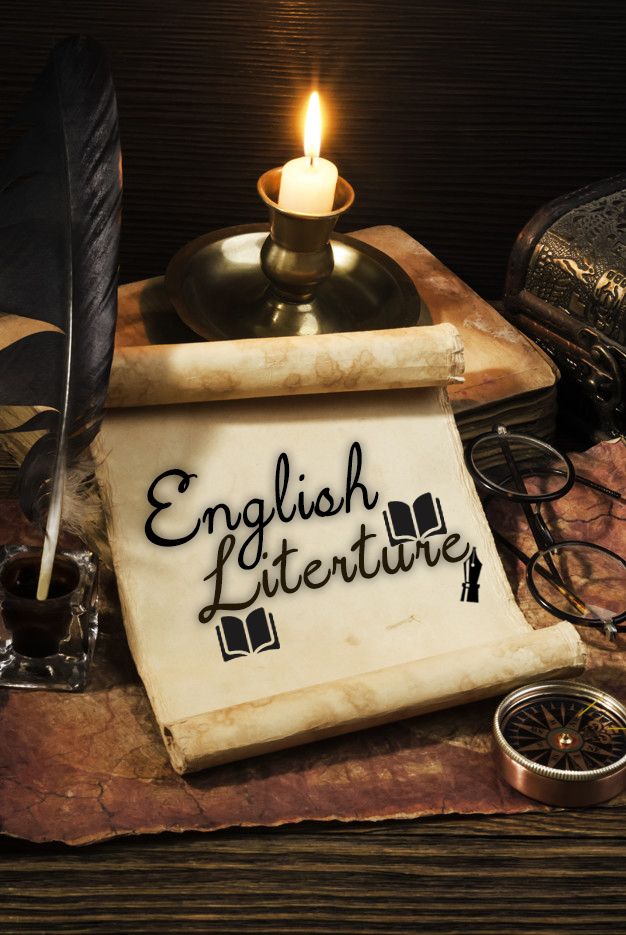 For convenience of discussion, historians divided the continuity of English literature into segments of time that are called “period”. The exact number of these periods vary, but the list below confirms to widespread practice. The list is followed by a brief comment on each period, in chorological order. 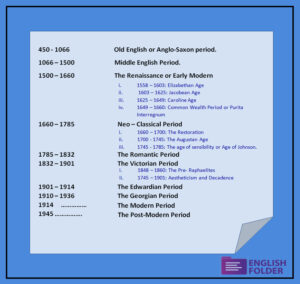 The Old English Period or The Anglo – Saxon period, extended from the invasion of Celtic England by Germanic tribes (The Angles – Saxon and Jutes) in the first half of the fifth century to the conquest of England in 1066 by the Norman French the leadership of William the conqueror. The Anglo Saxon were then conqueror. The Angle Saxon were then converted to Christianity in the 7th century.

English literature started with songs and stories of those three tribes. Its subjects were the sea, the boats, battels, adventures, and the love of home. Their poetry reflected their profound emotion and bravery. Accent, alliteration, and sudden break of each line gave their poetry a kind of Martial rhythm. The main characteristics of Old English literature are the love of freedom, responsiveness to the nature, strong religious convictions, belief on fate, respect to womanhood and devotion to glory as the rolling motive in every warrior’s life. Beowulf was the first great heroic folk epic of unknown author.

The fourteen century is important for the growth of the English national spirit during the wars with France. Geoffrey Chaucer, father of English poetry, is famous for his poetry and its variety. A good deal old Middle English prose is religious.

Chaucer’s The Canterbury Tales consists of the of 17 000 lines. A group of pilgrims tell stories to pass the time on their journey from London to Canterbury. The characters are realistic and language is simple. Mystery plays, Miracle plays, and Morality plays prepared foundation for Elizabethan drama.

The Renaissance Age is divided into four dominant period which are:

An era that marked by supplementary term such as rebirth and revival was replaced by a description called early modernism.

Queen Elizabethan ruled England from 1558 to 1603 and she steadily loved England and inspiring all her people with her unbounded patriotism which exults Shakespeare and Spencer. Queen Elizabethan was the source of inspiration for all writers of the age. During the Elizabethan age drama made a wonderful leap into maturity. The drama reached the splendid perfection in the hand of Marlowe, Shakespeare and Ben Johnson. Therefore, we call it The Golden Age of Drama. English prose in the hands of Francis Bacon started polished and effective essay. He also called the father of English essays.

Major writers of this age

Marlowe is a revolutionary figure in English drama. He was born in shoe maker’s family. He obtained his degree in 1593. His works are “The Tamburlaine”, “Dr Faustus”, “Jew of Malta”, “Edward II”. Marlowe has some defect such as lack of unity in plot construction, use of over luxuriance of imagination and difficult words and violent language. He ignored minor characters in his tragedies.

Shakespeare was born and raised in Stratford -upon- Avon. At the age of 18, he married Anne Hethaway, with whom he had three children.

His father had died before he was born. His mother married a tradesman who cared of his stepson. After he finished his studies, he joined in army. His main works are Every man in his humor, The Alchemist, The silent woman, etc. His plot construction is weak and comedies of humors lack true humors. He did over correction in his dramas.

The age has the following characteristics.

The writers of this age broke the trends of the Elizabethan age and started new style of writing. Elizabethan writers were highly imaginative and spontaneous but the neo – classical or the writers of neo – classical age became highly intellectual and reason based. The writer of that age practiced logical, argumentative writing style. Neo – Classical writing is full of intellectual rather than emotion.

The Neo – Classical Age is divided into three main periods which are given below.

William Congreve is the supreme master of the comedy of manners. He wrote all his dramas before he was thirty. The Old Bachelor, The Double Dealer, Love for Love are his major works. he is a greatest comedy writer in this period.

Bunyan wrote above sixty books. He was a religious man with great respect to the Bible. His books include The Pilgrim’s Progress, Grace Abounding, Holy war etc. He wrote realistic novel in simple and vivid language depicting the picture of lower-class people.

This age has the following characteristics.

Romanticism is the revolt against pseudo – classicism/ Augustan age. The publication of “The Lyrical Ballads (1798), was the heralder of Romanticism. The Augustan age was highly intellectual, rational, artificial style, no place for nature and feelings, dealt with the artificial life of upper class etc. So, romanticism revolted against it.

Return to nature played very important role in changing people to love nature, rejecting nasty crowd of the town The Medieval revival is a notable trend of this age. Romantic poetry is spontaneous overflow of powerful passions. Love of supernatural, this is a wonder mystery and beauty of the universe and nature. Romanticism is an important literary movement which began in Western Europe during 17th century and went on till the second half of 18th century.

Major writers of this age.

His mother died when he was seven. He a natural poet. For him, nature is everything. He treats nature as friends, a lover, a teacher. In his mind nothing is ugly. He is famous for his sonnets and lyrical Ballads etc. His works are The Prelude, The Excursion, etc.

He is a poet, critic and philosopher of romanticism. Coleridge is called the high priest of romanticism for his three great poems – The Ancient Mariner, Kublakhan, Christabel. His poetry is fragmentary. He makes the supernatural look natural.

P.B shelly struggled against the human misery. He is an optimist and a reformer regarding the future of mankind. He married twice. He died when he was sailing a small boat. Shelly is one of the best lyrical in English literature. His works are The Odes, to west wind etc.

The general features of the age are given below

Queen Victoria ruled England from 1837 to 1901. The Victorian was an era of material affluence. Political consciousness, industrial and mechanical progress, scientific advancement, educational expansion, empire building and religious tolerance. The Victorian age was a period of peace and prosperity. Education was highly developed in this time. Charles Darwin’s Origin of Species changed the traditional concept. W.J Long says that this is the age of prose and novel. The novel in this age fills place, which the drama held in the days of Elizabeth. Immoral novels were written and published in this age. Victorian literature is the writing of realism rather than romance, not the realism of Zola and Ibsen but deeper realism, which strives to tell the whole truth. Widespread materialism saddened many writers of this age. The Victorian compromise between the rich and the poor was strengthened. After Lord Tennyson and Beatrice Webb tried to have compromise between science and religion. Victorian novelists maintained a compromise between realism and romanticism.

Major writers of the Victorian Period.

Tennyson was a representative writer of the Victorian Age. He was great lyricist. He made a minor observation in nature. His main works are, Poem by Two Brothers, The princess, Idle Tears, The Cup etc.

He was born in a middle-class family. His father was a bank clerk mother was a sensitive musical woman. His works are Soul, Man and Woman, The Ring and Book etc.

E.B Browning wrote good poems in spite of her poor health. She married Robert Browning without her parent’s consent. Her major books are The Cry of the Children, Poem Before Congress etc.

The general features of this age.

The Modern Age started after the first world war. All the trends of social, economic, political, cultural and literary word of the Victorian Age were discarded and new trends were introduced in the arena of writing. Literature of the Modern Age is governed by realism. It brought about commercialization of art, literature music. Rapid discoveries of science and technology have developed the field of trade and business. Enormous output of books was another feature of this age. Foreign influence is very strong. The Modern Age is fertile for equal development of all genres. Science fiction is imaginative narrative based on the scientific development frank expression of sex matter in literature can be found. The modern writers do not hesitate to express sex desire, experience and its effect.

The main features of this period are

Main writers of the Modern Age.

Rudyard Kipling was born in India when the power and influence of Britain was very strong all over the world. His books indirectly served British Empire in India. His works are Mother on Mine, The feet of the young man etc. He was the laureate of the animal world. He was an imperialist at heart.

George Bernard Shaw is the great dramatist of the modern age and second after Shakespeare. He was born in Ireland but lived a long time in England. He tried writing all genres but got a great success in drama and essay. His main books include Widower’s House, Arms and the Man, The Apple Cart. Etc.

The Post-Modern Age started after the Second World War, overthrew traditional values of the world. The war introduced a number of changes that are reflected in the writing of this age. This age is basically influenced by German philosopher of Nihilism. Nihilism refers to radical and extreme attitude, which denies all traditional moral and social values. It is also influence by Sigmund Freud and the principle of Karl Marx. The reaction is seen in style of writing through the use of such device and concept. Post-Modern generally refers to the criticism of absolute truth or identities and grant narratives. It is an emerging period. Stream of consciousness techniques is used to disclose the continuity flow of mental events of the characters. Modern man has a sense of alienation even in a crowd because of the people lack faith and honesty.

Some prominent writers of the Post-Modern age

The characteristic of this age:

Difference between Modern and Post-Modern literature.